The spring production of Cabaret, a classic American musical set in 1930s Germany, has created a unique learning laboratory—true to the Theater Department's mission—in which students are asking big questions and learning how to work as a team. In making connections between a time in history and present-day issues, the cast members are creating theater that will give them skills they can use in life and in their future careers. 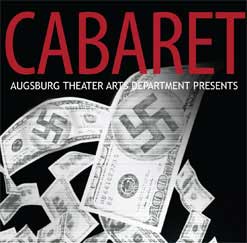 Darcey Engen, associate professor and chair of the Theater Department, said the rehearsal process raised important questions for the cast members. "1930s Germany was a time of great wealth and great poverty, and the middle class was stressed," Engen said. "We discussed the conditions, drawing similarities to what is now happening in our country."

Rehearsals began shortly after the proposed Minnesota Constitutional amendment to define marriage was defeated and following the elementary school shooting in Newtown, Connecticut. These events helped cast members relate current issues to the circumstances in 1930s Germany and the discrimination that centered on race, class, and sexuality.

"We talked a lot about discrimination, intolerance, and violence and how all of those themes are presented in this musical," Engen said. The cast reflected on how those issues created the conditions that made possible the rise of the Nazi party and wondered whether the current U.S. culture makes people tolerant to injustice and violence.

"The fact that we are young people doing this show and trying to understand history and the current state of our world has really expanded our minds," said Brianna Olson-Carr '13, an English and theater major. During a rehearsal, the cast was asked to make a list of all of the problems they believed the U.S. was facing. "It was a long list but we kept adding to it. It was overwhelming."

Themes connect to the present day

Andrew (Kleidon) James '16 said many lines in the play will seem meaningful to today's audience, but the cast didn't make any changes to the script in order to reference modern issues. "The moment that stands out to me is when Sally [a cabaret performer] says that people should just be people," James said. "That relates in a lot of ways to the issues we are facing in the gay rights movement today, and it's really striking."

Olson-Carr wants theater-goers to think about an important question her character asks in the play—what would you do? She plays Fraulein Schneider, a German boarding house owner who is engaged to marry Herr Schultz, a Jewish fruit vendor. Jews were the target of intense discrimination on the part of the Nazi party. After Schneider is told that marrying a Jew could be detrimental to her business, she calls off her engagement.

"She gave up love for survival, but she could have fled or made a different choice," Olson-Carr said. "I get a sense from this character that some people really don't have that choice, and I feel that I have learned what it feels like not to have choices. That is why I want that question to stick," she said.

Engen hopes that by asking questions and analyzing their current lives, students will learn to think critically and to be reflective about important issues. "I also hope they will train themselves to be allies for others so that we can live in a world of equality and non-violence. And ultimately, I want them to create art that causes others to think critically as well."

James, a first-year student who plays Herr Schultz, said his mind has been opened and his calling has been strengthened through his involvement in this production. "My life's goal is to create meaningful work, to make art that makes people think," he said.

Giving students opportunities to create in collaboration with faculty and artists-in-residence is central to the Augsburg Theater Department's mission. Being involved in Augsburg productions gives students skills and knowledge that they can bring into their careers, whether they work in the theater or in a corporate job. This and other aspects of the program led to it being named by Backstage magazine as one of five top theater programs outside of New York.

For Cabaret, Olson-Carr said the cast explored possibilities of songs and scenes and "got to the bounds of the imagination." She said that experience was valuable even if the cast members' ideas were not used in the final version of the production because students learned to utilize their creativity and to be open to others' ideas.

James noted that being involved in Cabaret, his first production at Augsburg, has been very different than his previous acting experiences. "Darcey spent the first weeks of rehearsal letting us play with ideas and shape the show in different ways. Our production stays true to the script but it's a different entity in itself," he said. James said he feels that he has a personal stake in the show because he helped design it with the rest of the cast.

James has used his theater learning experience in other classes to be more open to different perspectives and to incorporate new ideas. "It was exciting to me to learn that everything was fair game. Now I realize that if you don't try things, you'll never know what could be," he said.