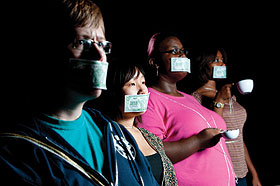 It's not traditional theater. And it's not very common to see students on campus with tape over their mouths and rope wrapped around their bodies. But that is exactly what students in Augsburg's upcoming theater performance did last week to promote their work.

Debt, a student-led production exploring the topic of student debt, began last week with a series of site-specific performances. The production continues Nov. 1-4 with town-hall style meetings that use popular theater techniques and facilitation methods to generate dialogue among audience and cast members.

"This production is about community organizing and engagement," said Sarah Myers, assistant professor of theater at Augsburg and Debt director. "We are learning about civic practice, using theater to encourage social engagement and to create social change."

Myers introduced the topic of student debt for this production because she said it had been coming up in conversations she had with students, staff, and faculty at Augsburg, and it is currently an important issue across higher education.

While she chose the topic for Debt, she said nearly every part of the project has been "devised, discussed, structured, and executed by students."

Myers and the student performers and facilitators began work on Debt this fall with three weeks of research, brainstorming sessions, scene creation, story-telling, power mapping, improvisation, and workshops on deliberative dialogue and social positioning. Their initial work generated ideas for the site-specific performances and the town hall meetings, which are led by student facilitators.

Before and after the town halls, staff and students will have information tables in the lobby outside Tjornhom-Nelson Theatre. A group of students from the cast will provide information for other students interested joining a student-led action team. Staff from Academic Affairs and Student Financial Services will also be on hand to answer questions about debt and student financial issues.

Though Debt is not traditional theater, students learned theater and performance technique through their work in the production. In addition, they gained skills for facilitating and focusing conversation and developed community organizing skills. "This is a time when we really need active dialogue in our society," Myers said. "These facilitation capabilities are good skills for students to have in the work world and beyond."

Cast and director are clear that the issue of student debt "doesn't end here," as the fourth town hall suggests. Quinci Bachman '15 said, "We're giving the audience more questions than answers. This is a topic that needs to be actively pursued because there is not just one solution."

"This project is the beginning of a student-driven, campus-wide conversation," Myers said.

"We want to educate students and provide resources so that they know what they can do to help themselves," concluded Brianna Olson-Carr '13.

Admission is free for the Debt town halls. Attendees are asked to bring non-perishable food items that will be used for a food shelf that the Fighting Poverty at Augsburg group plans to open on campus in the spring semester. Ticket Information >