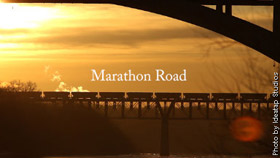 "As student-athletes, Riley, Paul, Tori and I saw these guys and many other Team USA Minnesota runners working out throughout the school year—at very fast paces—and were always inspired by what they could do. They were a huge source of motivation for us as Auggie athletes," Vogel said. "So we decided to give back to them by documenting their training and provide motivation and inspiration to people all over the city, state, and country leading up to Saturday's big race."

Read the full article and watch the documentary on the Augsburg Athletics site.